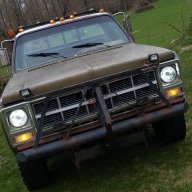 I really like inline 6s. with an unhealth enthusiasm. I also use my tuck primarily for moving things and snow plowing, both of which an inline 6 would do wonderfully.

And I like the simplicity. Half the upper gaskets, half the nonsense. Easy access especially in the engine bays of our truck. Never has an engine bay felt so empty despite a large V8 and an entire hydraulic setup being in it.

If i were to get an inline 6, I would do the modern upgrade where you have a manifold with 2 carburetors on it, so as to limit the distribution problems of 6 cylinders spread out for the intake.

The only issues I can see:
1) my current hydraulic drive setup. If the engine were to be in the bay, it would have to have a significant room on driver side. Nothing could go past the brake reservoir, which I dont think would. I could always move my plow hydraulic setup, but hassle is hassle.
2) exhaust.. I need one anyway, who cares.
3) transmission mating. i have the 3 speed manual with a Low gear(4 forward, 1 reverse gear) and subsequently 4wd. I dont know trans number but would anything special be required to hook up. good time for clutch and adjustment
4) mounts. no idea where they would be, if drilling, what mounts.

Has anyone done this?
And Im not only looking at a 292. Any of the factory inline 6 displacement offerings(not sure if different engines or bores, etc). Bigger is better, with sand and plow my truck has to be close to 11k 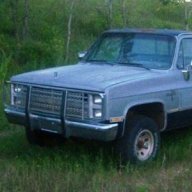 The transmission will bolt up and so should t he clutch but you will have the 292 flywheel as it uses bigger bolts to mount it to the crank. The mounts you'd just get off an I6 truck and bolt them to your truck. Fan shroud will have to be changed and possibly a different throttle cable depending on your dual carb set up you're talking about. I've never heard of a single carb being an issue on a 6. The engine vacuum draws just fine. What I'd be more concerned about is dual exhaust. Yes, it makes a difference on an I6. I had a 230 with single exhaust. I bought another and the guy cut the exhaust and welded in another flange to add another pipe. I won't say it made a huge difference, but it did make a noticeable difference. If the difference is noticeable then it's significant. I like your idea, I just hate that it costs more to do less engine. 350's are just so damn cheap and so many aftermarket parts available, everything else, esepcially an I6 is much more expensive.

I heard especially on the ford 300 fuel distribution gets too lean on the outward 2 cylinders. Either way, I wouldnt be doin an insane amount of work like hot rodding. If it ran good in previous vehicle (hoping the owner isnt lying) probably just do new gaskets all around while out of truck, clean it so I can see liquid leaks, do maintenance. How does the duel exhaust change? and did it meet in the same pipe later or did it just never connect? 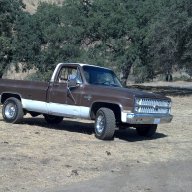 Location
Right where I am

If you're wanting to learn more about inline sixes, check inliners international and stovebolt.

Dual exhaust and offenhauser intake manifolds seem to bring the best torque enhancements. You can add a performance cam, but these engines are built for low rpm torque to begin with. There is the lump port kit for the head as it eliminates the bolt boss that sits in the middle of each intake port and increases intake flow charge, but what I've read the lump port kit doesn't see any gains unless you enlarge the valves to 1.84 or 1.94. For what you're wanting, the 292 would be best, and I wouldn't suggest going smaller than a 250.

Also checkout 12bolt.com for more information on the inline six. The 12bolt website has a dyno chart of some dyno runs he did with the same 292 engine with various tweaks done, like with and without the lump kit, performance cam, 1.94 valves. 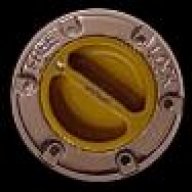 Iirc, the engine crossmember is different and, consequently, motor mount frame saddle positions are different for a 292 than a 250 or V8. 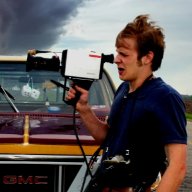 I have sort of thought of doing the same thing in my '95 Suburban.

The GMT400 platform was made with the inline 6's in mind, but they were only used in Brazilian trucks.

It currently has a pretty worn out TBI 350 in it, so when this engine bites the dust (Probably not any time soon) I think I may yank it out and stick in a 292.

I'd have to run new fuel lines, (no more electric pump) get some motor mounts, and get a conversion flex plate in order to mate it to the 4l60e, but it would be a pretty simple swap overall.

I know its cheaper, I have 4 sbc engines in my shed, most ofthem complete. And parts are abundant. This engine will stay with me, I would actually like to build it, per se.And interesting info, good to know. pretty much would want to buy it as a parts thing truck maybe
You must log in or register to reply here.

What is the best oil viscosity to run in a 292 Inline-six with high miles?
2