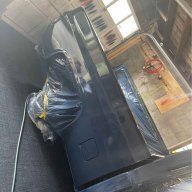 Spent the last 3 hours sweating my face off trying to remove a stuck wheel. the other 3 came off no problem, rear driver... not so much

Said a few four letter words in front of my daughter .... check

Pryed and beat some more .... check

you get the point lol

are there any secrets of tricks... I used a 5 lb sledge, i dont have a bigger one... yet 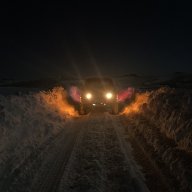 Heat is your best friend, even a butane torch could help if you sit there long enough. An air hammer would probably be the next tool I went with.
R

Pic of the wheel please. No joke. 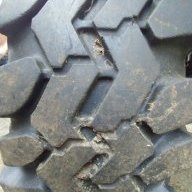 Honk if parts fall off

My advice is to walk away and let a friend try. Dont look at what he's doing. You probably dont want to know.

I'd have issues sometimes like that and call the old man to help. He usually sent me away for a second to take care of whatever it was. I finally asked him why one day and he said, "I ain't afraid to break it like you are!"

But seriously. Try a big 3 jaw puller if you can fit the jaws through the wheel. I had to do it on my jeepster. Put a piece of scrap on the flange on the end of the axle and stick the teeth through the white spoke rim. The rim is no more I'm afraid. Keep in mind safety precautions that's a lot of force that can really only go one way.

You must be registered for see images attach
R

K. I'd see if I could cross a chain from 1 cut out at say 9 and across to 3 press the base of a bottle jack against the chain the post against the axle put some steady pressure to it then whack the back side of the wheel.
Last edited: Jul 27, 2021 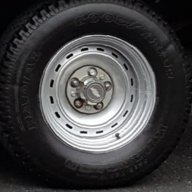 81squared said:
You must be registered for see images attach
Click to expand...

Those threads for the center caps any good? Push a bolt through there, see if it pops.

Those threads for the center caps any good? Push a bolt through there, see if it pops.
Click to expand...

That's what I would try. I'm guessing the paint is holding it on, the almost friction fit and wet paint.
S

When I worked at chain tire stores. We had a 10LB sledge for wheels that were really stuck. We'd put them up on the hoist, let the air out of the tire and one or two good hard whacks would get it off. Please if you are going to hit the wheel hard, let the air out of the tire, if you were to rupture the wheel or bead it could kill you. When I was with Goodyear we had to have a guy hauled off to the hospital after the inner tire of a dually blew as he was filling it. Nothing hit him but the air or sound wave gave him a concussion.

8LB sledge... one easy pop this morning and she came free !! 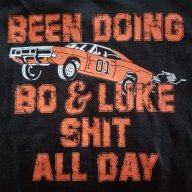 I work in a scrap yard and process cars, we take off aluminum wheels and some times steels. Ive had many cars that i remove all lug nuts, smash them with the 20lb sledge, even pick them up and drop them them with the CAT loader and they still wont come off! Set them on the ground with no lug nuts and slam into the wheel with the loader forks and they still dont come off. Worse comes to worse they get flipped upside down and our sennebogan 835 gets to remove them with the claw.

Ha, ha,ha,! I have never heard of any such thing! Really?? It was stuck? Now I've had the same problem with brake drums being stuck but never a wheel. @78C10BigTen, what in the world had hold of them that they would be stuck like that?? Maybe one of the bolts was bent or two, or something like that, but there's nothing other than the bolt threads to get stuck to. What could it have been? I can't see there being that much rust holding the wheel unless it had been under water or something like that.
@81squared, looking at the back of the rim, what did you see?? Was there something evident holding the rim on there? I want to see a picture of it! Did you find one side of the bolts have threads raked off of it?? 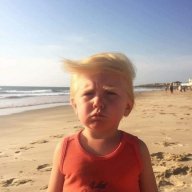 I’ve had this problem several times over the years.Take a flapper wheel and clean up the center hole in the rim and the center of the hub lip that makes contact with the hole. 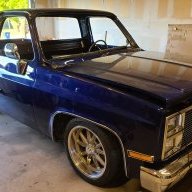 In places where this tends to happen take a little wheel bearing grease and put it on the face of the drum/rotor. Just a very thin layer. 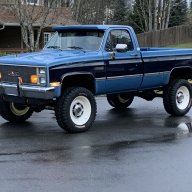 Scott91370 said:
In places where this tends to happen take a little wheel bearing grease and put it on the face of the drum/rotor. Just a very thin layer.
Click to expand...

Or anti seize.
You must log in or register to reply here.

C
Getting in deep, cab is on a rotisserie!(long intro:))
2