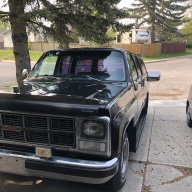 So last year my copper/brass radiator developed a small crack and I was wondering if I should find another copper/brass rad or go with an aluminum equivalent? I just want to have the best cooling I can get without spending hundreds of dollars. 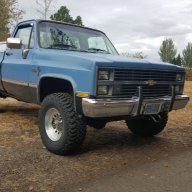 YYCWilliam said:
So last year my copper/brass radiator developed a small crack and I was wondering if I should find another copper/brass rad or go with an aluminum equivalent? I just want to have the best cooling I can get without spending hundreds of dollars.
Click to expand... 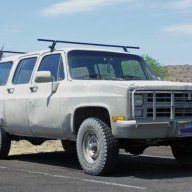 The replacement copper/brass radiator I had installed back in 97 or so had been fixed once a couple years ago but finally **** the bed about 6 months back. Since there is no longer a radiator shop within 250 miles of me, I bought a Champion aluminum and so far is good to go. It was under $300 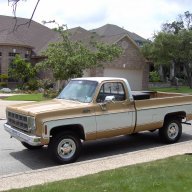 I installed a Champion aluminum radiator from Jegs a couple of years ago and its still going strong. It provides much more consistent cooling than the old OEM 3 row copper radiator. 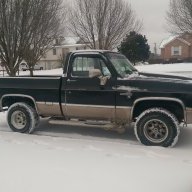 YYCWilliam said:
So last year my copper/brass radiator developed a small crack and I was wondering if I should find another copper/brass rad or go with an aluminum equivalent? I just want to have the best cooling I can get without spending hundreds of dollars.
Click to expand...

repair yours for less than $50 if you have a rad shop around (provided the tanks are good). 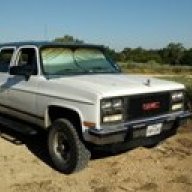 Aluminium big rad worked much better than stock unit on my 91. Had to extend the brackets(similar as big bbc rad set up)

I had a cooper/brass in my '74 C10 and had it rebuilt three times or more since I bought it in '81. The first thing I did was had the rad. checked and some minor repairs done, not much. Two major repairs done over the next twenty years or so and it finally bit the dust a year ago. To have it recored because those radiators are antiques now would be $250! After many hours looking I finally found one just like mine on line for about $150. But it was either hope I could get ten years out of it, that is if I could fine a radiator shop left due to the EPA putting them all out of business due to the lead in the water, all over the floors, lead, lead, lead. Liberals don't like lead. I might have to opt for a new aluminum one. So I replaced my copper/brass one with a aluminum one. It cools about 20 to 30 percent more than my old one. It took some getting used to. I kept waiting for the temp to go up to operating temp. I even wrote about it when I first joined this forum. I thought something was wrong. No that's the nature of the alum. rad's. 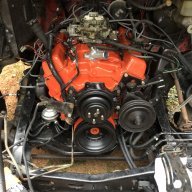 I don’t like aluminum and plastic tanks. The combination of the 2 , it isn’t if it will fail ! But when will it fail , but price wise you can get a descent all aluminum radiator! I personally spent the money to find that copper brass 3 core , 399.00 from speedway motors free ship ! The other one lasted 35 years . That’s pretty darn good .depends a lot on your driving habits . Rough off rd driving , long distance Etc .

Yeah, that's what I was saying above that my original brass/copper rad. lasted decades. I had to get it boiled out every once and awhile, but once fixed it would be a long time before it needed to get anything else done to it. And I always used good anti-freeze to. Then the core finally went out from corrosion and I looked into getting it cored and start from scratch. The shop wanted $250. Well, I found a new one on line for $250. But I also looked up one of those aluminum ones with the plastic tanks. I could not find a rad. as thick as mine and looked for a month.

I even went way off my year truck and was looking at Pontiac's, Oldmobile's, and Buick's, and Cadillac's. But that was after I had already looked at all the year trucks from '73 to '89 in C20, C30, G10 to G30, then P10 to P30 R's, all the K's '73 to '89 and I mean all engine sizes to. And all I could find in aluminum with plastic tank rad.'s was 1" core, a single core replacement. I called radiator manufactures and asked if they would custom build me a three core alum. rad with a plastic tank. They said, no they would have to make a special mold for it and it would end up being to expensive.

Then finally I found a three core radiator for a late '80's big block Cadillac but it had a oil cooler in it besides the trans. cooler and I didn't want that. I think the problem was more the specific size I wanted it in, 29" wide by 19" tall. Which is pretty much standard. So it was either I go back and cough up the $250 and get a new brass/copper one, or get one of those all aluminum ones custom cars have. I looked them up and found a three core for my truck for $158! Well, I got one, and I really like it a lot. I swore I'd never get one of those but price was the deciding factor. 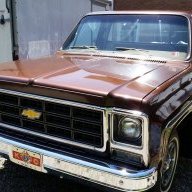 Speedway motors is where I purchased mine 3 core copper brass . They have 2 core , 4 core etc . Mine was 399.00 Wich is pricy . There maybe other sources to find one . But thru looking and looking, glad I just bought from them .

JeffK10America said:
Speedway motors is where I purchased mine 3 core copper brass . They have 2 core , 4 core etc . Mine was 399.00 Wich is pricy . There maybe other sources to find one . But thru looking and looking, glad I just bought from them .
Click to expand...

Thanks, I'll take a look.
You must log in or register to reply here.

The Quest for the Last Radiator
2 3