I some of you know, I had vapor lock issues on my trip to the mountains last summer. I'm add a return line (so new fuel pump and sending unit) and have 2 questions:

Does it matter which?

Thanks for any advice you can give me.

For a blazer, a three port is one without the return line. Blazer tank does not have the fuel filler vent provision built into the tank, so the sender has one more port than an equivalent function saddle tank. Four port sender has 1) Fuel filler neck vent 2)Fuel Feed 3) Fuel Return 4) Tank vent(vapor return to charcoal canister)
7

Second question, the 4 port sending unit I purchased will have an extra port… I’m assuming I can simply cap it off?

Again, I’m assuming I do not need to set up a charcoal canister…?

Bonus question… can I assume the vapor locking is most likely caused by fuel sitting in the pump… and NOT being vaporized between the pump and carb? Should I also wrap that steel line between the fuel pump and carb with say a rubber fuel hose to insulate it a bit? 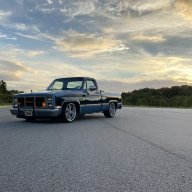 I would pick up some actual heat shield to wrap around the steel line. I've got DEI heat shield (should be able to pick it up at any parts store) all along my fuel line under the truck cuz it's near-ish to the exhaust. If you still have some issues after adding the return and adding heat shielding to the line, you might try a phenolic spacer or something to put under the carb to help keep the heat from the manifold from reaching the carb

7900_Blazer said:
Second question, the 4 port sending unit I purchased will have an extra port… I’m assuming I can simply cap it off?

Again, I’m assuming I do not need to set up a charcoal canister…?

Bonus question… can I assume the vapor locking is most likely caused by fuel sitting in the pump… and NOT being vaporized between the pump and carb? Should I also wrap that steel line between the fuel pump and carb with say a rubber fuel hose to insulate it a bit?

Mine just has a hose to one of those plastic wobble cap vent thingies that you put on your diff vents. It keeps your tank from pressurizing. For emissions vehicles that goes to the charcoal can and then into the intake so you aren't venting hydrocarbons. It keeps it from stinking like gas vapor too.

Vapor lock happens on the suction side of the pump. Once it gets pressurized it wont vaporize(usually). The reason you dont get this as much on a return line pump is because it is flowing MUCH more fuel through the feed and return lines and therefore the fuel doesn't sit in the line and get hot before getting sucked to the pump. As it sits in the line and absorbs heat, it gets to the vaporization point and then the pressure drops as the pump does it's thing and the fuel vaporizes.
7

One of the tests I ran to verify my vapor lock was happening IN the pump... is with it running - motor hot - and really just barely enough fuel in the glass fuel filter which lives between the pump and the carb (so I know it is in the process of vapor locking)... I took a water hose and ran water over just the pump itself... almost immediately the glass fuel filter filled back up with gas... so I'm pretty certain my vaporizing of fuel is happening IN the pump itself.. not in the lines leading to the pump, nor in the line from the pump to the carb...

So again, I'm assuming if I can keep fuel circulating through the pump via a return line (as suggested)... ideally that will solve my vapor lock issue...
S

Its easier to cap off a bung than to add one. I ordered the 4 bunger.
S

I don't see where anyone addressed your question regarding using rubber fuel line for the return line. Yes, it's fine. There are however a few concerns using rubber over metal.
1. Rubber line will deteriorate (rot) and while metal can rust, metal will outlast the rubber.
2. Rubber line has to be carefully secured to the frame, and it has to be secured up in a lot of places, so it doesn't.
A. Drape down and hit the ground or get snagged on something.
B. Rub on something and cause a leak.

So back in the day I use to deal with Class C motorhomes built on the 70's Dodge chassis. Dodge did not do a factory return line, and filter was before the pump. Then drop a RV coach body on it and guess what. The odds are stacked against it, in almost ever way. And while we are not in a particularly hot climate here we have mountain passes and plenty of hills. So what we did was to cut the metal fuel line between the pump and carburetor, flare it and install a fuel filter with two out lets one designed for pressure output to the carb, the other one was return to tank. We always ran rubber fuel line back to the tank. We secured the line with... IDK what they are technically called, but they are metal bands, padded with rubber and you run a self tapper though the holder into the sheet metal. Don't use zipties, to much risk in them breaking after years in service. Never had a single come back for a problem with the line, and always took care of the vapor locking.
P

SirRobyn0 said:
technically called, but they are metal bands, padded with rubber
Click to expand...

Adel clamps is what we call them in aviation
You must log in or register to reply here.