i bought an 87 chevy 4x4 with a 350 recently. the truck runs fine when i first start it. if it idles long enough it starts cutting out and goes dead. it will also run fine until i stop the first time and then it stumbles again. i found out from the guy i bought it from, he bought it new btw, a mechanic replaced the gasket under the throttle body about 2 years ago. today i replaced the map sensor, egr solenoid, temp sensor, and gas filter. previous owner replaced plugs, wires, and cap. i had someone look at it a couple weeks ago, he replaced the temp sensor. i picked it up and it ran fine for about 15 miles and started acting up again. any suggestions on what to try next? im thinking maybe the module in the distributor? or maybe the computer? i hate to keep throwing parts at it. 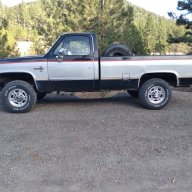 Yeah, test or swap out the ignition module or coil. 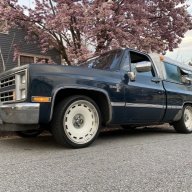 Throttle body’s are fun! If it’s not running good when warmed up / in closed loop, but runs just fine when you first start it (open loop), and you say it cuts out after idling a long time/ stumbles n dies after being under load….I’d be willing to wager that your 34 year old, one wire O2 sensor, is shot and likely to still be the original one.
It def could explain why it’s dying after warming up.
Same situation with my 87 except the original owner had passed and it sat for a long ass time, and it ran just like how you described…scoured this forum and “the other one”, Did plugs, wires, dizzy, cap, rotor, button, ICM, coolant temp sensor, oil pressure switch n sensor (for good measure lol) egr, took out the IAC to look for carbon build up, new MAP, rebuilt the throttle body, new fuel pressure regulator diaphragm / rebuild kit, and it would always seem like I fixed it, till it warmed up. Finally dawned on me that the O2 sensor was probably bad, and sure enough that was the problem. That was replaced in Jan of 2019, I’ve daily driven it since then, and never had the issue comeback


Too long didn’t read; A faulty sensor is telling your ECU lies and its making your ratio, fuel-lean.
S

I'll try that today. This truck hasnt been driven much in the last few years. Previous owner just used it for his hunting truck. It only has 119k on it. I'm sure that sensor has never been changed. Thanks
S

i tried the 02 sensor to.day. no change. went ahead and changed cap, rotor button, and module since i didnt know how long ago they were replaced. helped some but still not right
G

are any codes stored?? obd1 will store them for a set number of restarts.. do you have access to a scan tool or aldldroid and a Bluetooth obd1 reader to see what the sensors are reading? that makes diagnosing TBI a lot easier for most things. as John Nes said, something is getting squirrelly when it gets to closed loop because the computer is using the sensors to change engine parameters instead of the default stuff in open loop. you may also move the various sensor harnesses around and see if anything changes as you do as it could be a wiring issue....which is often harder to diagnose. I suggest getting the drivability and emissions manual for your year out of the library. those manuals have a lot of troubleshooting information. 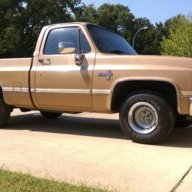 I had a bad pickup coil in the distributor.
Very intermittent and heat definitely affected the idle.

stumped said:
i tried the 02 sensor to.day. no change. went ahead and changed cap, rotor button, and module since i didnt know how long ago they were replaced. helped some but still not right
Click to expand...

Dang man, sucks to hear that. Just remembered another thing I did while chasing this problem down, was ditched the old and clogged up cat and ran duals. Didn’t fix it but would explain why it runs like sh!t when it’s at operating temp 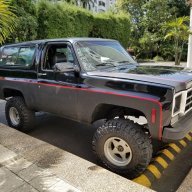 I hate all of those electronic issues. I am old school. Carb and non-electronic tranny.
S

i talked to one of our auto mechanics teachers today, i work maintenance for a school system, he said the first thing he would check is fuel pressure. he lent me a gauge, checked when i got home, 13psi. so i dont think thats the problem. anybody familiar with the knock sensor or idle air control? and now for my dumbest question, where is the port to plug into to read the codes?
G

you can jumper the A and B (top two on the right) on the obd1 port and turn the key to RUN to read stored codes. it should flash 12 three times, any stored codes, and 12 three times. but if you haven't seen a check engine light, there probably won't be anything stored. the port should be under the dash to the right of the brake release. 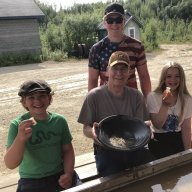 Somewhere out there, in the repair book or on the innernet, there is a chart that gives the resistance readings that the coolant temp sensor should be seeing at different temperatures. There might even be a procedure for setting it up for the test.
If it ran fine for a while after the temp sensor was installed and the codes were cleared, then I would suspect a faulty new temp sensor.
Remember AC Delco is Your friend.
S

Found the test port. Right where its supposed to be. Had a brake controller mounted in front of it. btw, went ahead and replaced idle air control today, didnt want it to feel left out. Auto mechanics teacher at one of my high schools said he had a reader. Going to get it tomorrow. Im leaning toward needing a new distributor. When i replaced the module, the two wire plug in the distributor that plugs into the module was cracked and broke. im thinking it could be grounding out. the truck seemed to be actually running worse today, if thats possible.

Before you go crazy, idle the engine and use a small propane bottle around the base of the TBI and along the edges of the intake gaskets. If the engine suddenly smooths out, you have an air leak.

Cheap checks first. Parts second.
You must log in or register to reply here.